Study provides scientific evidence for the first time: The Internet is capable of bearing the burden of Corona – results allow us to breathe a sigh of relief

New York, 10 November 2020. In a study that is the first of its kind worldwide, an international team of researchers from the world’s leading operator of Internet Exchanges DE-CIX, together with BENOCS GmbH, the Brandenburg Technical University Cottbus-Senftenberg, the IMDEA Networks Institute in Madrid, the Max Planck Institute for Computer Science, and the Universidad Carlos III de Madrid, has examined the effects of the Corona pandemic on the global Internet infrastructure. In the period from January to June 2020, data traffic was examined at Internet Exchanges in Central and Southern Europe, as well as on the US East Coast. The results allow us to breathe a sigh of relief: Yes, there were huge changes in data traffic in 2020; and the Internet is coping amazingly well with them. 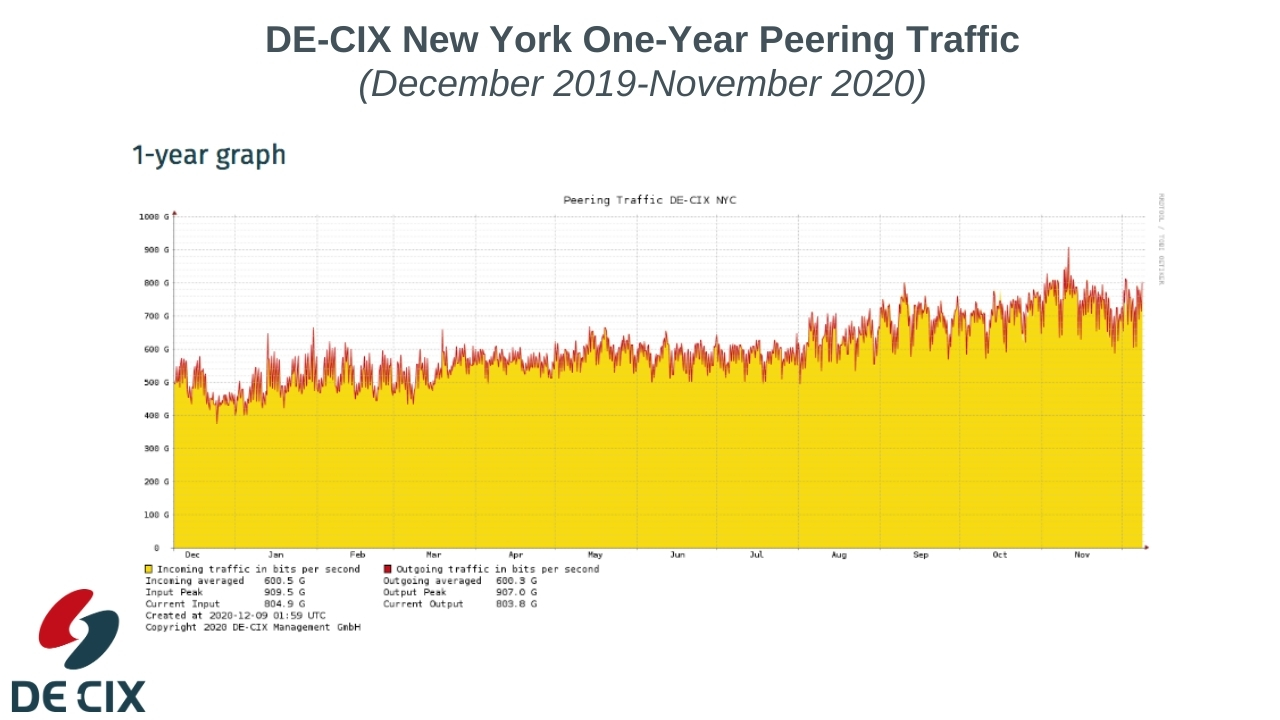 The composition of data traffic has changed since the beginning of the pandemic: The use of videoconferencing services and virtual private networks (VPNs) for access to company resources from the home environment has risen sharply. At DE-CIX New York, for example, data traffic resulting from video conferences (such as Skype, Teams or WebEx) was measured, with many providers nearly doubling capacity to support demand. In addition, within just a few days in March, the average global data traffic rose between 15% and 30%, depending on the region. The core hours of Internet usage have also shifted: Before Corona, the main time of use was in the evening hours during the week, whereas since March it has been spread equally across the day. This means that, for the first time, network utilization on weekdays resembles that on weekends.

“Traffic growth is not a problem for the Internet!”

Dr. Christoph Dietzel, Global Head of Products & Research at DE-CIX and member of the research team of the study, comments: “With all the changes in use and the extreme growth in global data traffic this year – which we have also observed in Frankfurt – there has been growing concern among users that the Internet will not sustain this growth long-term. But the exact opposite is the case: The Internet has defied the pandemic, bearing the protracted global burden of Corona – and we have now been able to prove this scientifically. The Internet – the ‘network of networks’ consisting of more than 60,000 sub-networks – was conceived of decades ago to ensure worldwide communication even in extreme situations (such as pandemics),” says Dietzel. “In addition, the increase in usage is mainly occurring outside the previous peak usage times (e.g. during the day while working from home). The effects of the increased traffic volume can easily be absorbed: either by using existing reserve capacity, or by quickly switching additional bandwidth. The Internet is robust and adaptable enough to withstand the pandemic – even in the event of another strict lockdown,” adds Dietzel.

Thousands of networks are connected to each other at the 25 DE-CIX Internet Exchanges around the world, which means that DE-CIX plays an essential role in the further development of interconnection and the standards of the Internet. Dr. Christoph Dietzel heads the internal Products & Research department at DE-CIX: a team of researchers and IT experts who identify current challenges and conduct individual research. In close cooperation with industrial and academic partners, the research team is working on projects to develop new technical and digital possibilities in order to continuously push forward innovations in the field of interconnection.

To the full study: The Lockdown Effect: Implications of the COVID-19 Pandemic on Internet Traffic.

DE-CIX is one of the world’s leading operators of Internet Exchanges, and this year is celebrating its 25th anniversary. Taken into operation in 1995, DE-CIX in Frankfurt, Germany, with a data throughput of more than 10 Terabits per second (Tbps) and over 1000 connected networks, is one of the largest Internet Exchanges in the world. In total, in its 25 locations in Europe, the Middle East, Asia and North America, DE-CIX provides over 2100 network operators, Internet service providers (ISPs) and content providers from more than 100 countries with peering and interconnection services. The connected customer capacity of all DE-CIX locations worldwide exceeds 65 Terabits. Further information at www.de-cix.net