New York, 16 December 2020 – DE-CIX, the world’s leading Internet Exchange (IX) operator,  unveiled breaking news at its virtual DE-CIX Interconnection Summit 2020 – North America edition – that it has doubled its North American footprint with two additional IXs, one now available in Chicago, IL, and one soon to be ready for service in Richmond, VA. The two locations expand upon and interconnect with DE-CIX North America’s existing multi-service interconnection platforms in the New York and Dallas metro markets. By doing this, DE-CIX is creating the largest carrier and data center neutral interconnection ecosystem in North America. 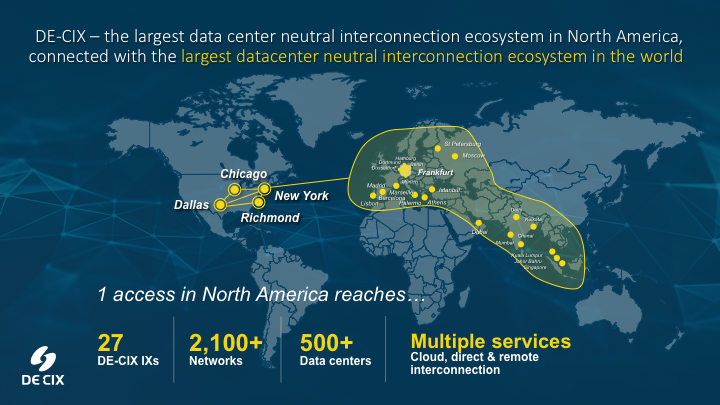 DE-CIX Chicago is available for service today in 12 facilities throughout the metro market including key carrier hotels 427 S. LaSalle and 350 E. Cermak. The fully redundant and distributed carrier and data center neutral IX and multi-service interconnection fabric of DE-CIX Chicago, launches with more than 10 networks connected day one. DE-CIX Chicago anchors the Midwest region for DE-CIX North America. Connectivity in and throughout Chicago reaches the east, west and southern coasts of the United States with direct connectivity to Canada, firmly positioning the market as a core interconnection point in North America. Until today, Chicago is the only core communications hub without a second major Internet Exchange. Similar to the Dallas market prior to DE-CIX Dallas’ launch in 2016, DE-CIX intends to create a second major IX in the Chicago market, offering the community increased choice and improved interconnection quality and services.

DE-CIX’s Richmond expansion, the Richmond Virginia-IX (RVA-IX), leverages the market’s existing IX, illustrating the company’s eagerness to support community-lead IX initiatives. RVA-IX was launched in 2016 as a non-profit community by: SummitIG, Richweb, VA Skywire, Pixel Factory, and the Bank of Virginia. The RVA-IX has access points throughout the Richmond market with Pixel Factory Data Center, EdgeConneX, and QTS Datacenters. Through the asset acquisition of the RVA-IX, DE-CIX will take operational ownership, and will expand upon its interconnection capabilities benefiting the local and regional market. Integration into the DE-CIX interconnection ecosystem means that connected networks in Richmond will have access to more services, can reach other DE-CIX locations and more ASNs, and can enjoy increased redundancy and resilience.

Doubling its North American footprint overnight, DE-CIX North America’s four IXs are set to cover key markets including the Northeast (DE-CIX New York), Southwest (DE-CIX Dallas), the Midwest (DE-CIX Chicago) and Mid-Atlantic (to be DE-CIX Richmond) regions. DE-CIX Chicago, DE-CIX New York, and DE-CIX Dallas are interconnected with each other via a private network, creating a fully redundant, optimized low-latency route between each market – this ecosystem will be extended to interconnect also with DE-CIX Richmond when it is ready for service. In addition to access to peering and cloud connectivity services available through DE-CIX’s DirectCLOUD capabilities, customers can access the world’s largest carrier and data center neutral interconnection ecosystem through DE-CIX’s GlobePEER Remote solution. DE-CIX’s global interconnection ecosystem reaches all the way from the DE-CIX IXs in North America, to Europe, the Middle East, and India, and Southeast Asia, connecting more than 2100 networks overall.

“RVA-IX was chartered to ‘keep local traffic local’ and make ‘the Internet’ for our members and member’s users perform better.  Proximity to Northern Virginia with direct access to a variety of subsea cables is unique and important to our location in Richmond,” remarks Scott K. Brown, President of Pixel Factory. “ We think we did this for our members and we were also able to bring a lot of Internet content from across the country, closer to our members.  Now, we have the opportunity to bring the content from around the world closer by becoming part of the largest Internet exchange in the world. “

“As we approach 2021, DE-CIX North America is embarking on a new era of interconnection. By announcing these two very important Internet Exchange locations for DE-CIX, Chicago and Richmond, we will have four key markets fortified for interconnectivity solutions,” comments Ivo Ivanov, CEO of DE-CIX International. “The success of DE-CIX New York, now ranking among the top five IXs in North America with over 260 networks, and DE-CIX Dallas, which ranks among the top 20 IXs in North America with over 90 networks, solidifies our position in the market as the leading neutral interconnection platform provider for Internet peering and cloud connectivity.”

DE-CIX is one of the world’s leading operators of Internet Exchanges, and this year is celebrating its 25th anniversary. Taken into operation in 1995, DE-CIX in Frankfurt, Germany, with a data throughput of more than 10 Terabits per second (Tbps) and over 1000 connected networks, is one of the largest Internet Exchanges in the world. In total, in its more than 25 locations in Europe, the Middle East, Asia and North America, DE-CIX provides over 2100 network operators, Internet service providers (ISPs) and content providers from more than 100 countries with peering and interconnection services. The connected customer capacity of all DE-CIX locations worldwide exceeds 65 Terabits. Further information at www.de-cix.net