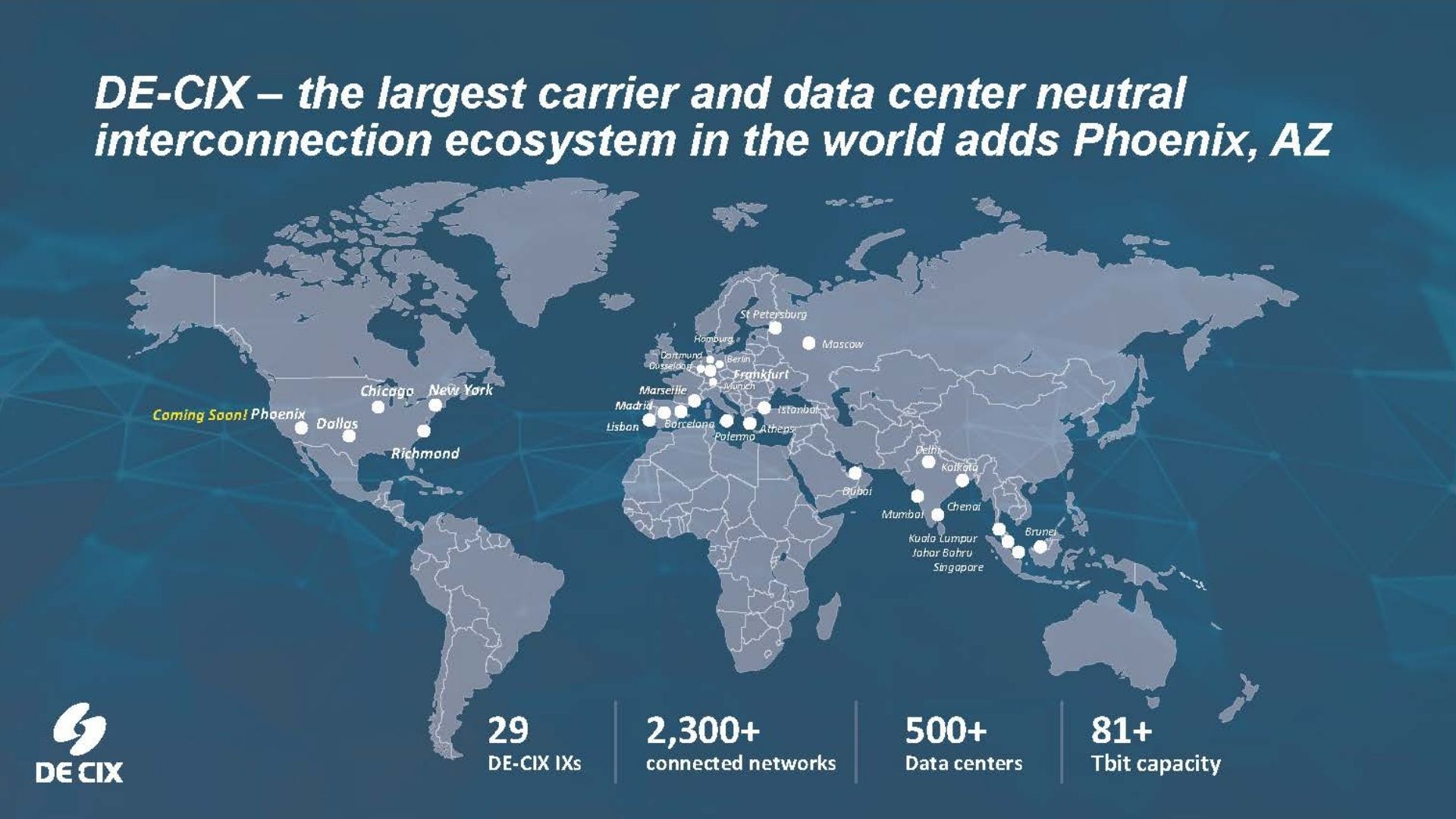 Phoenix, Arizona, 30 August 2021 – DE-CIX, the world’s leading Internet Exchange (IX) operator and home to the largest carrier and data center neutral interconnection ecosystem on the planet, expands again in North America, adding Phoenix, Arizona (AZ), as its fifth IX in the U.S.. After a year of double-digit growth and expansion in 2020, with the addition of DE-CIX multi-service interconnection platforms in Chicago and Richmond, Phoenix is set to become DE-CIX’s western-most location, fortifying connectivity across the United States while enhancing gateway access between North America, South America, and Europe.

Phoenix (AZ) is the fifth-largest city in the U.S., is within five hours driving time from both Las Vegas and Los Angeles, and represents the fifth largest data center market in the U.S.. DE-CIX’s expansion to Phoenix cements the company’s position as the largest carrier and data center neutral IX, serving four out of the top five markets in the US – Chicago, Dallas, New York, and now Phoenix – with low latency proximity to the fifth-largest market, Los Angeles, which is less than 5ms from the burgeoning Phoenix market.

“Phoenix is the new urban technology center of the western U.S.. As a core hub for data centers, connectivity is robust, with over 60 long-haul, metro fiber telecom, broadband, and wireless networks traversing the market,” comments Ivo A. Ivanov, CEO of DE-CIX International. “DE-CIX’s expansion to Phoenix increases our relevance in the North American market, bringing data and interconnection services closer to the users as our locations are now spanning from East to West. We continue to cement our position as the largest carrier and data center neutral interconnection ecosystem in North America and the world.”

DE-CIX Phoenix offers a high-quality interconnection fabric to the market. The company’s experience in launching new markets goes hand-in-hand with its global brand and reputation in building and delivering industry-leading interconnection solutions. DE-CIX New York, launched in 2014, is now the leading neutral IX provider in the New York/New Jersey market, with over 260 networks. DE-CIX Dallas, launched in 2016, is the market’s leading neutral IX, with over 100 networks connected. DE-CIX Chicago, launched in 2020, is accessible from over 13 data center locations, making it the most distributed IX in that market. DE-CIX Richmond, announced in 2020, with support from the RVA-IX, is set to become the market’s largest IX. As a result of the company’s commitment to industry-leading interconnection solutions, including peering, remote peering, cloud connectivity, advanced services such as the Microsoft Azure Peering Service for enhanced connectivity to the Microsoft Office 365 suite of products, and a vast array of network, data center, and sub-sea cable partners, DE-CIX is set to become Phoenix’s largest neutral and most advanced IX in the market.

DE-CIX Phoenix will be available at leading data centers throughout the market. For more information about DE-CIX Phoenix, click here.

DE-CIX (German Commercial Internet Exchange) is the world’s leading operator of Internet Exchanges. In total, in its 28 locations in Europe, North America, the Middle East, and Asia, DE-CIX interconnects over 2300 network operators (carriers), Internet service providers (ISPs), content providers, and enterprise networks from more than 100 countries, offering peering, cloud, and interconnection services. The combined connected customer capacity of all DE-CIX locations worldwide exceeds 80 Terabits, making it the largest neutral interconnection ecosystem in the world. DE-CIX in Frankfurt, Germany, with a data throughput of more than 10 Terabits per second (Tbps) and over 1000 connected networks, is the largest Internet Exchange in the world. Further information at www.de-cix.net.