Frankfurt am Main (Germany), 4 November 2020. DE-CIX (German Commercial Internet Exchange) in Frankfurt has set a new record for data throughput at peak times. Reaching 10 Terabits per second, DE-CIX broke through the stratosphere shortly after 8 pm yesterday evening, 3 November. It was only at the beginning of March that DE-CIX Frankfurt reached the record-breaking 9 Terabit-per-second mark. Now, in just a few months, the old record from springtime has been exceeded by almost 10 percent. Already at the end of December 2019, the traffic record had reached 8.1 Terabits. In comparison to this time last year (7.1 Terabits), data throughput at the Frankfurt Internet Exchange has grown by 40 percent; under normal circumstances, the expected annual growth would be approximately ten percent. With 10 Terabits per second data throughput at peak times and more than 1000 connected customers, DE-CIX in Frankfurt maintains its position as one of the largest Internet Exchanges in the world. Further DE-CIX locations in New York, Madrid, Marseille, Istanbul, and Dubai have also achieved new records for throughput at peak times. 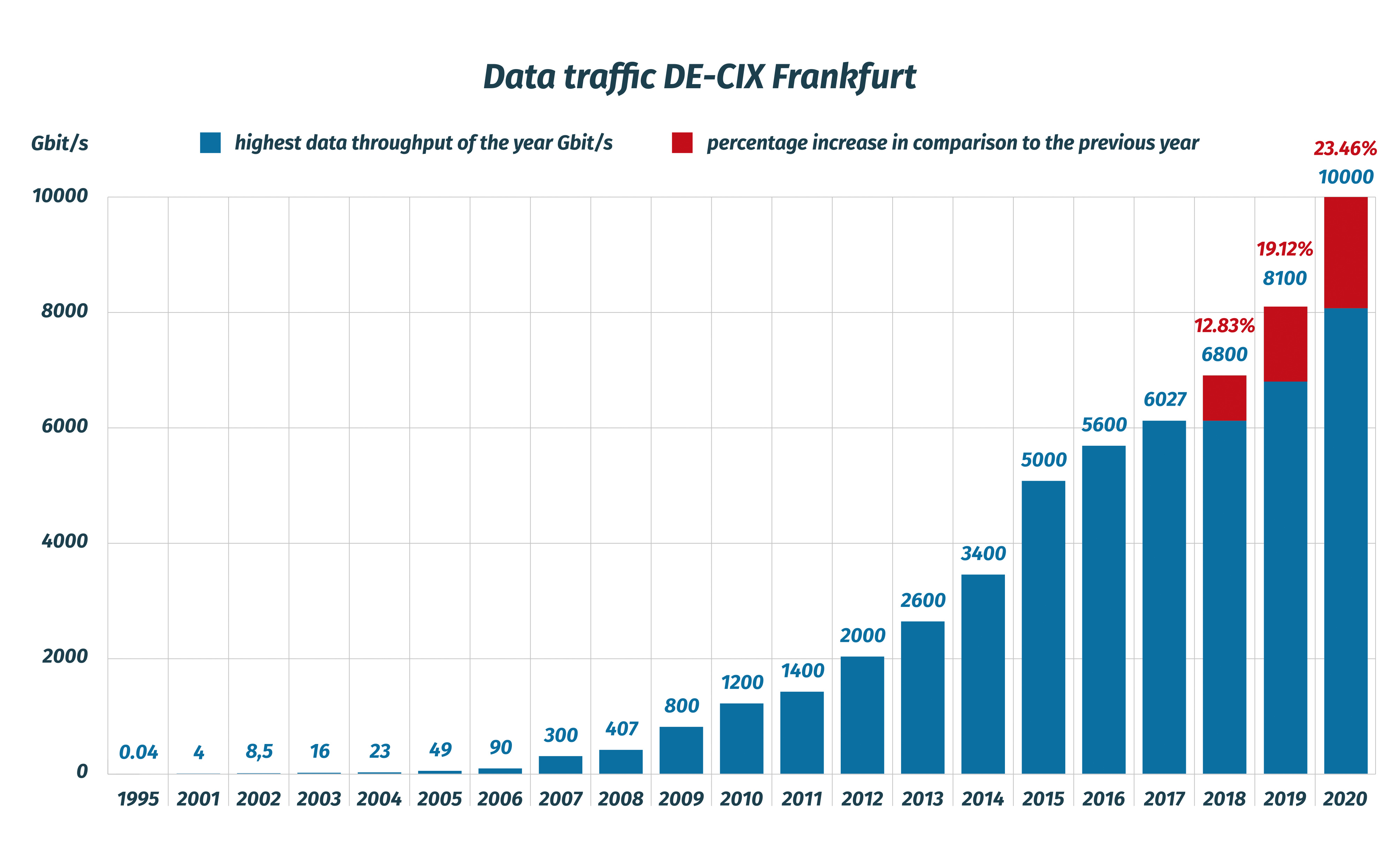 “Whether it’s for home-schooling, work-from-home, or private use, the global outbreak of the Covid-19 pandemic earlier in the year resulted in a meteoric rise in the use of digital applications – for streaming, chatting, or gaming. This year, there was also no slow-down in the summer months – quite the opposite! As a result of the coronavirus, digitalization has been boosted at all levels. We see in particular that large enterprises and listed corporations are currently adapting their interconnection strategies and are specifically seeking consultations and investigating the possibility of data exchange at and via Internet Exchanges like DE-CIX. With all eyes on the US election this week, a further impact on traffic has been felt around the world. It has already been made clear that the Internet can withstand massive loads – like those of a global lock-down. Now is the time to increase the quality of the Internet maximally, right through to the end user,” says Dr. Thomas King, CTO at DE-CIX.

Background information: What is a Terabit of data per second? What does a data throughput of 10 Terabits per second mean?

25 years of Internet history “Made in Frankfurt”

DE-CIX (German Commercial Internet Exchange) was born in 1995 in the old post office building in the Gutleut quarter of the Main metropolis, when three Internet service providers – MAZ from Hamburg, EUnet from Dortmund and XLink from Karlsruhe – joined forces. The aim was to promote global digital networking and establish efficient and cost-neutral data exchange via Internet exchanges. Today, DE-CIX is an important part of the global Internet infrastructure, with 25 locations in Europe, the Middle East, Asia and North America.

DE-CIX is one of the world’s leading operators of Internet Exchanges, and this year is celebrating its 25th anniversary. Taken into operation in 1995, DE-CIX in Frankfurt, Germany, with a data throughput of more than 9 Terabits per second (Tbps) and over 1000 connected networks, is one of the largest Internet Exchanges in the world. In total, in its more than 20 locations in Europe, the Near East, Asia and North America, DE-CIX provides over 2000 network operators, Internet service providers (ISPs) and content providers from more than 100 countries with peering and interconnection services. The connected customer capacity of all DE-CIX locations worldwide exceeds 60 Terabits. Further information at www.de-cix.net.