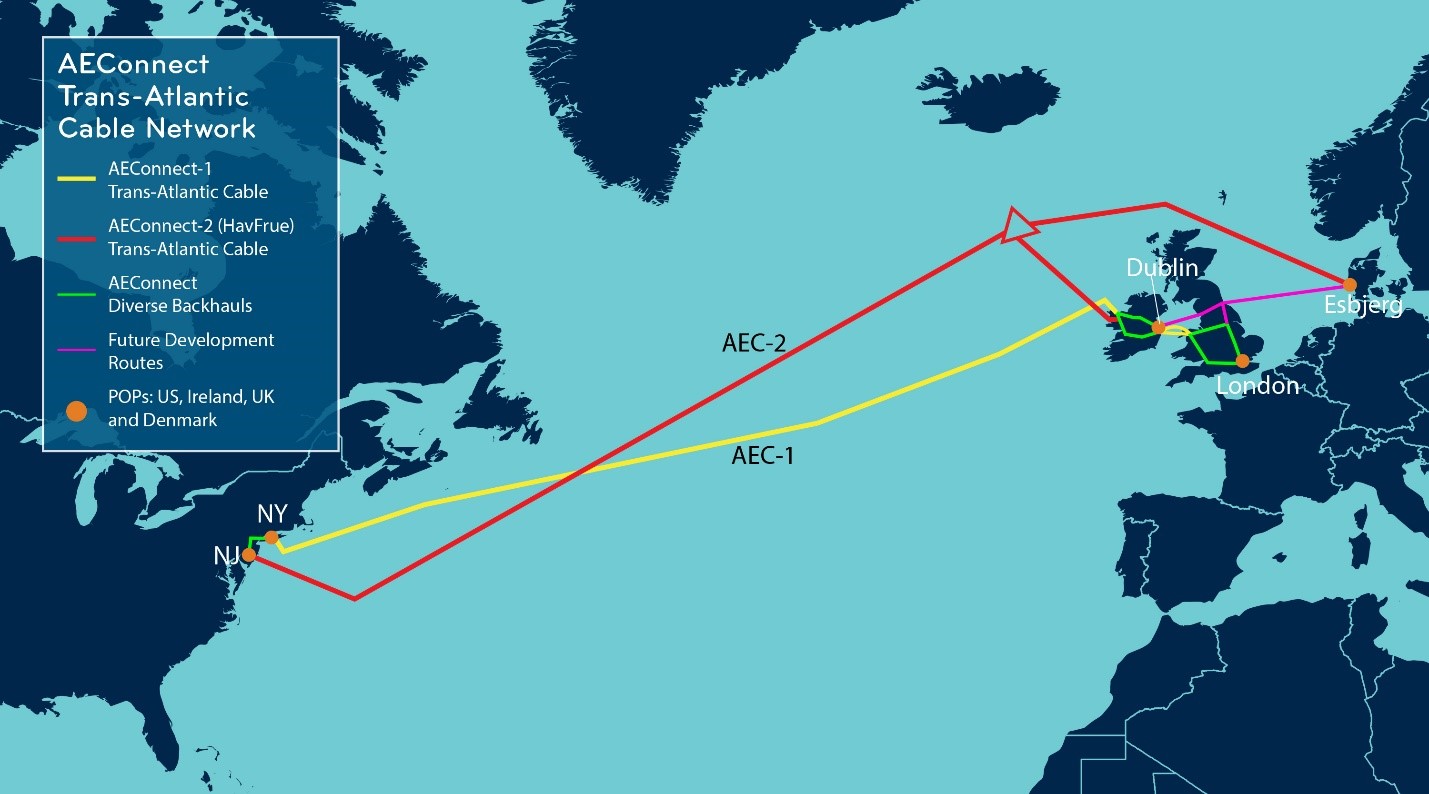 The HAVFRUE subsea cable is the first new undersea cable traversing the North Atlantic to connect mainland Northern Europe to the U.S. in nearly two decades.  Aqua Comms is the appointed system operator and landing party in the U.S., Ireland, and Denmark.  TE SubCom has been selected as supplier for the system on which route survey operations have begun. The projected Ready-for-Service (RFS) date for the HAVFRUE subsea cable is Q4 2019.

Aqua Comms will market and sell capacity services and raw spectrum on its portion of the HAVFRUE cable system under the brand name America Europe Connect-2 (AEC-2) as complementary to its existing transatlantic cable, America Europe Connect-1 (AEC-1), running between New York and Killala in County Mayo, Ireland.  Aqua Comms is also concluding a new cable route to Denmark through the UK, developing CeltixConnect-2, which connects Dublin to Manchester, as well as the North Sea Connect cable that will link Stellium’s data centre in Newcastle, England, to Esbjerg, Denmark.

Combining these new subsea cable developments, the build of the HAVFRUE / AEC-2 cable system, together with existing systems owned and operated by Aqua Comms, will create a resilient, ring-based infrastructure between the East Coast of the U.S., Ireland, and Northern Europe, connecting the hubs of the pan-Atlantic hyperscale data centre industry in North America, Ireland, and Scandinavia.

“Invest in Denmark is proud to welcome Aqua Comms and the other consortium companies into the country with this fantastic addition to our internet infrastructure,” comments Steen Hommel, Director, Invest in Denmark.  “The Ministry of Foreign Affairs couldn’t be happier about this investment. Landing a brand new, top-of-the-line fibre cable on the west coast of Jutland will further cement Denmark’s connectivity to North America.”

The HAVFRUE / AEC-2 infrastructure network services will be delivered to and from modern, high-reliability, carrier-neutral interconnection points at NJFX, in Wall, New Jersey, and 1025Connect in Long Island, New York, with a resilient network connection in between, offering a Manhattan bypass route increasing diversity and resiliency in the region.  In Europe, the services will be offered from all landing stations and carrier-neutral, metro area Points of Presence (PoPs) in Dublin, London, Amsterdam, and Esbjerg, where the system will more than double fibre connectivity to Denmark, increasing the diversity and reliability of the Internet to the region.

“Aqua Comms is delighted to be investing as a part of the consortium for the HAVFRUE cable system connecting the U.S., Ireland, and Denmark,” states Nigel Bayliff, Chief Executive Officer, Aqua Comms.  “The demand for hyperscale capacity and connectivity linking North America with Northern Europe cannot be overestimated, and the combination of AEC-1 / AEC-2 subsea cable systems, facilitated by the construction of HAVFRUE will deliver reliability and resilience at an auspicious time, especially in view of the meteoric rise of the digital economy taking place in Scandinavia.”

The Aqua Comms team is attending PTC’18, taking place January 21-24, in Honolulu, Hawaii, Metro Connect, January 29-31, in Miami, Florida, and Submarine Networks Europe, February 20-21, in London.  Aqua Comms invites companies to meet with its representatives at these events so that it can assist organizations with their long-term connectivity needs across the Atlantic Ocean.

Aqua Comms DAC is an Irish Carriers’ Carrier specialising in building and operating submarine cable systems and supplying fibre pairs, spectrum and capacity networking solutions to the global media, content and carrier markets.  It is the owner/operator of America Europe Connect-1 (AEC-1) and CeltixConnect-1 and continues to build on its vision of efficient submarine infrastructure ownership with membership of the HAVFRUE consortium and development of CeltixConnect-2 and North Sea Connect, bridging the Northern Atlantic between North America and Northern Europe. To learn more about Aqua Comms and its portfolio of subsea cable systems visit www.aquacomms.com