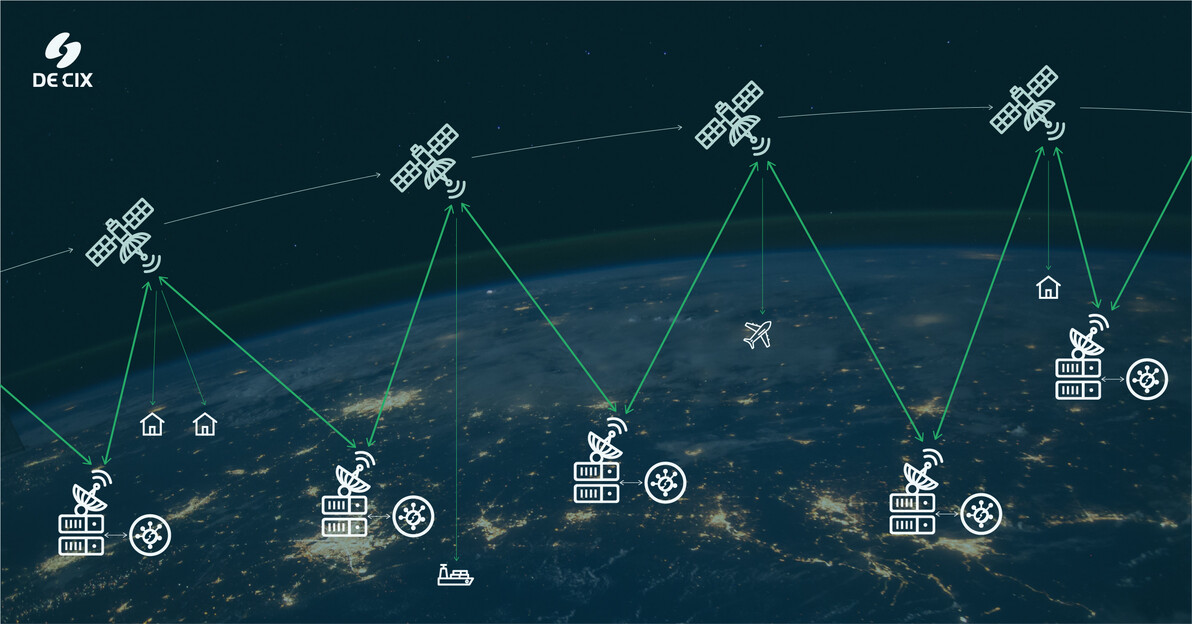 Frankfurt am Main (Germany), 1 September 2021 – Low-Earth-Orbit (LEO) satellites offer great opportunities to provide underserved regions with (better) Internet access. However, the infrastructure not only consists of satellites. Operators also need the right interconnection on the ground. DE-CIX, the world’s leading Internet Exchange (IX) operator and home to the largest neutral interconnection ecosystem on the planet, shows how new interconnection solutions are building bridges for the Internet of tomorrow, connecting Earth and space.

Currently, about 40 percent of the world’s population has poor or no access to high-speed Internet. Internet coverage from LEO satellites offers the potential to bring areas away from the major terrestrial data highways online.

“Businesses in these locations have been struggling to digitalize,” explains Ivo Ivanov, CEO of DE-CIX International, “and there is a lack of suitable Internet access for educational institutions, for example. Often, the only access is via copper cable networks and, at best, geostationary satellite links – resulting in Internet speeds as slow as less than one megabit per second and a latency (response time) of up to 400 milliseconds, which is simply not sufficient. The maximum latency for a good user experience of today’s digital applications is 65 milliseconds or less, which can easily be achieved in regions with good interconnection. DE-CIX is working to bring high-performance interconnection services closer and closer to people and businesses, everywhere, and welcomes the opportunity to work with the LEO satellite operators to make this a reality.”

Satellites: the mobile towers of space

LEO satellites are ideal for connecting remote regions to the Internet quickly and comparatively inexpensively. They are less expensive to construct than geostationary satellites or terrestrial fiber connections to outlying locations. In addition to the economic attractiveness, LEO satellites have other advantages over satellites in higher orbits because they are closer to the Earth’s surface. This means data doesn’t have to travel as far, shortening the time it takes to reach its destination and thus reducing latency for users on the ground. At the same time, however, LEO satellites orbit the Earth very quickly (at speeds of about 27,000 km/h), which means that a larger number of satellites must work together and regular handovers to ground stations on the Earth’s surface are required to ensure continuous connectivity.

Looking at the way LEO satellites work, this can be seen as analogous to the mobile communications infrastructure on Earth. The LEO satellites perform a role similar to cell towers, and communicate with a ground station on Earth. The satellite consists of receiver-transmitter technology in the form of small terminals that can establish a connection between any two points in line of sight, with bandwidth in the gigabit range. Larger devices with multiple data streams can increase transmission bandwidth into the terabit range.

The ground station is basically a data center with an uplink terminal on the roof. Because LEO satellites orbit the Earth so quickly, there must always be enough satellites to ensure uninterrupted access, with enough time for the ground station to complete the handover to the next satellite before the preceding satellite disappears over the horizon. To return to the analogy with cell towers: Handover is essentially the same mechanism that occurs when a cell phone moves between different transmission towers or radio cells – for example, when driving on the highway. The difference in the case of LEO satellites is that the cell towers (satellites) are moving while the cell phone (ground station) is stationary.

Companies like SpaceX are currently exploring the optimization of satellite-to-satellite communications using lasers, in the form of Free Space Optical Communication (FSOC). The technology is still at an experimental stage, but has the potential to transport data around the planet 25 to 30 percent faster than fiber.

From satellite network to Internet connection

However, having a satellite network alone does not make the operator a satellite Internet provider. On the one hand, the connection to the remote community must be realized, so that the end users have access. On the other hand, the network of satellites must be connected to the Internet. Each satellite network operator must also interconnect with other networks before it can assume the role of an ISP from space. Typically, the interconnection of multiple networks is handled via an Internet Exchange (IX) – ideally in a digital hub with a large ecosystem of networks, cloud providers, and digital infrastructure providers. To make this work, the satellite Internet provider’s ground stations must be connected via fiber to data centers that connect to the chosen IX – either directly on-site, or via high-speed fiber to an IX-enabled data center nearby.

Internet Exchanges such as DE-CIX provide excellent opportunities for satellite Internet providers to connect to relevant networks so that their users can access the global Internet with the lowest latency.

To minimize latency LEO satellite network operators should connect to the geographically closest hub to the respective remote location. Large content networks and content delivery networks will cache the most in-demand content in such locations, meaning that this content can be accessed with low latency. Internet Exchanges can already support the infrastructure needs of the full range of space network operators, especially LEO satellite operators, with terrestrial interconnection. Companies like SpaceX, Amazon, Facebook and Google are pushing satellite Internet projects by selling services to users in more remote locations that they can’t reach terrestrially. Therefore, the first fully operational satellite Internet providers are likely to be these companies. Gradually, however, other providers will establish themselves on the market.

This is a similar development to what we have already seen with submarine cables. Facebook, Microsoft, and Google started laying their own submarine cables long ago, while content providers like Apple and Netflix began building their own networks six to seven years ago. Today, even banks and other large companies are starting to build their own global terrestrial networks.

Infrastructure on Earth in remote locations

In addition to the satellites, end consumers on the ground must of course also be connected to the Internet. A data center – even a small container data center – can act as a ground station, and this is then connected to users via the local last-mile cable or mobile networks. In developing areas with high population densities but still little access to global networks, local people and businesses will benefit from being better connected to each other and to the outside world. Local authorities could go the extra mile and set up their own small Internet Exchange for local data exchange, as well as providing incentives for satellite network providers.

Communities that do not have the necessary interconnection expertise can enlist outside help to get their own IX up and running. Interconnection providers like DE-CIX can quickly and agilely set up such a local IX as a fully managed service. This creates the conditions for the local community to build its own digital ecosystem.

Find out more at www.space-ix.net.

DE-CIX (German Commercial Internet Exchange) is the world’s leading operator of Internet Exchanges. In total, in its 28 locations in Europe, North America, the Middle East, and Asia, DE-CIX interconnects over 2300 network operators (carriers), Internet service providers (ISPs), content providers, and enterprise networks from more than 100 countries, offering peering, cloud, and interconnection services. The combined connected customer capacity of all DE-CIX locations worldwide exceeds 80 Terabits, making it the largest neutral interconnection ecosystem in the world. DE-CIX in Frankfurt, Germany, with a data throughput of more than 10 Terabits per second (Tbps) and over 1000 connected networks, is one of the largest Internet Exchanges in the world.