The geographic contours of the global Internet are changing shape dramatically, characterized by a rapid increase in data traffic driven by cloud and Over-the-Top (OTT) services, bandwidth-intensive applications and Big Data. This evolutionary shift, on which the proliferation of the Internet of Things (IoT) will have an enormous impact, is creating significant infrastructure challenges and corresponding opportunities to serve numerous underserved Tier II and III markets, not only across North America, but globally. What are some of these problems you ask?

It all comes down to physics. Whenever people think about the network component of the Internet, they imagine a vast web of fiber cables passing data at the speed of light. Unfortunately, the web of cables isn’t as expansive as people think and the data doesn’t travel at the speed of light. In fact, due to the multiple connections and signal regeneration devices, a typical data packet can travel at speeds as low as 45% of the speed of light, with each packet taking a different path from the one preceding it. This makes it almost impossible or prohibitively expensive to use the Internet for real-time data replication over distance to provide an “active-active” database or mail and messaging service. Not to be confused with Disaster Recovery (DR) services, where the primary system waits for confirmation that the backup system has completed the “data write” or update before moving to the next task. And the greater the geographical distance, the greater the wait between tasks. This means that proximity to the Cloud will become increasingly important in the coming days, weeks and years.

This delay, inherent to the system, causes significant challenges for cloud-based shared calendars, contacts and file systems. Just watch and time the upload or sync icons the next time to save a file to a Dropbox, One Drive or Google Drive. Now imagine this at scale in a hosted multi-tenant platform serving millions of active desktops, tablets, and phones.

With respect to continental Europe, serving Tier II and III markets translates to moving infrastructure, including the connectivity ecosystem, closer to the edge of the network. This will enable these markets to fully operate as independent and local resources necessary for efficient delivery of OTT content, cloud services, IoT-enabled devices and gaming.

So how best to serve Tier II and Tier III European markets and cities? The challenge that exists in Europe, or for that matter anywhere across the globe, is the same — but so is the solution.

The Internet of Everywhere Extends to Everyone

Despite their collective size, European Tier II and Tier III cities and markets are underserved. The population base of Tier II markets in Europe is generally smaller than Tier I markets individually, but many are close to Tier I markets in geographic size, economic activity and data use, and there are many more of them.

The Second Tier Cities Policy report identifies 124 Tier II cities in Europe, which make up almost 80 percent of the Continent’s metropolitan urban population. While Tier II cities are typically remote from their host country’s capital and major business hubs, their commercial and social activity significantly affect the performance of their respective national economies, as is the case for Nuremberg in Germany, Milan in Italy, and Lyon in France

In Europe as in the U.S., the Internet and its connections grew over time into something analogous to the hub-and-spoke model the airline industry uses to route traffic. Network Service Providers (NSPs) connect and pass traffic between interconnection exchanges in data center hubs, but because these hubs are located in Tier I markets, data packets must often take indirect and even circuitous paths. This often results in bottlenecks and network latency — like so many airplanes taxiing nose-to-tail along a runway, circling the skies or diverted to other landing destinations — factors which negatively affect the end user’s experience.

This situation creates an opportunity that many large data center providers have been prone to ignore. According to a report by FTI Consulting, “certain Tier II and Tier III markets will largely remain insulated from the larger wholesale and retail colocation focused providers as they continue to concentrate on larger hubs in Tier I markets.” While the subject of this report dealt primarily with the U.S. market, the same principle applies globally, including Tier II and Tier III cities across Europe.

Bringing the Edge to Global Customers

In North America, EdgeConneX has addressed the connectivity shortfall by building a portfolio of Edge Data Centers in Tier II and III cities that are strategically positioned near network provider aggregation points, extending the Internet’s edge as close to enterprises and end-users as possible. It is now replicating this proven model internationally when it launched the first European Edge Data Center in Amsterdam in January 2016.

The results have been staggering as measured by Conviva. In 2016, Conviva reported that localization improved rebuffering of popular videos by an average of 25% across eight markets. This was found by measuring hundreds of thousands of streams at the end-user level. Performance gains from EdgeConneX EDCs have also been verified by Cedexis, the leader in latency-based load balancing for content and cloud providers. In 2017, its panel of Real User Measurement data showed significant response time improvements immediately following EdgeConneX EDC deployments — 33 percent in the Minneapolis metro area and 20 percent in the Portland metro area — when compared with a traditional Internet architecture. 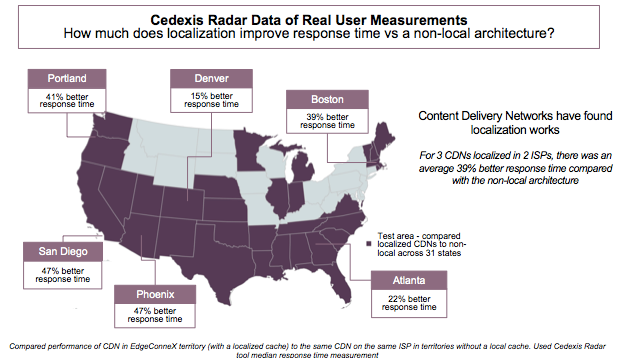 With the Amsterdam and other European EDCs to come, EdgeConneX is moving the ever-expanding global Edge to Tier II and III European cities that have significant size and economic activity, yet have been underserved by their regional infrastructure. In this way, EdgeConneX and the world’s top content, cloud, and application providers will unlock the potential of these vital markets and grow together with them. The Internet of Everywhere has no regional, national or international borders, rather it extends to everything and everyone.